BeaverTap Games and the Mikey Series

It’s said that a good rivalry can bring out the best in people, and that certainly seems to be the case for Mike Gaughen and Mike Meade. The two met on the TouchArcade forums when they found themselves constantly one-upping each other in high score competitions in various games. Among the many games the two played, Hook Champ, Mos Speedrun, and League of Evil proved to be major favorites. When both were accepted into the beta test for the then-upcoming Super Quickhook in early 2010, they began talking to each other via email. These discussions covered many topics, but one that came up fairly often was their mutual desire to make iOS games of their own.

As it turned out, one of the Mikes could program. The other Mike could make art. The two decided to try to work together to make an iOS game that checked off all of the boxes of their shared favorites. Mike Gaughen would handle the coding, while Mike Meade would take care of the art. They founded BeaverTap Games in late 2010, with the company’s name being inspired by the mascot of Gaughen’s Alma Mater, Oregon State University. Neither of them had ever made a game before, but they knew what they liked and didn’t have any particular time pressure to deliver a finished product.

The two worked on their game in their spare time for the next year and a half, putting a special emphasis on nailing down the feel of the controls. As the game’s development neared its conclusion, BeaverTap put in a lot of extra time to make sure everything was just right. Mikey Shorts released in August of 2012 to acclaim from critics and players alike. The game was particularly appreciated by the score-chasing community that Gaughen and Meade had come out of. Players found a lot of joy in running through the game’s levels again and again, shaving milliseconds off of their times to climb to the top of the rankings. 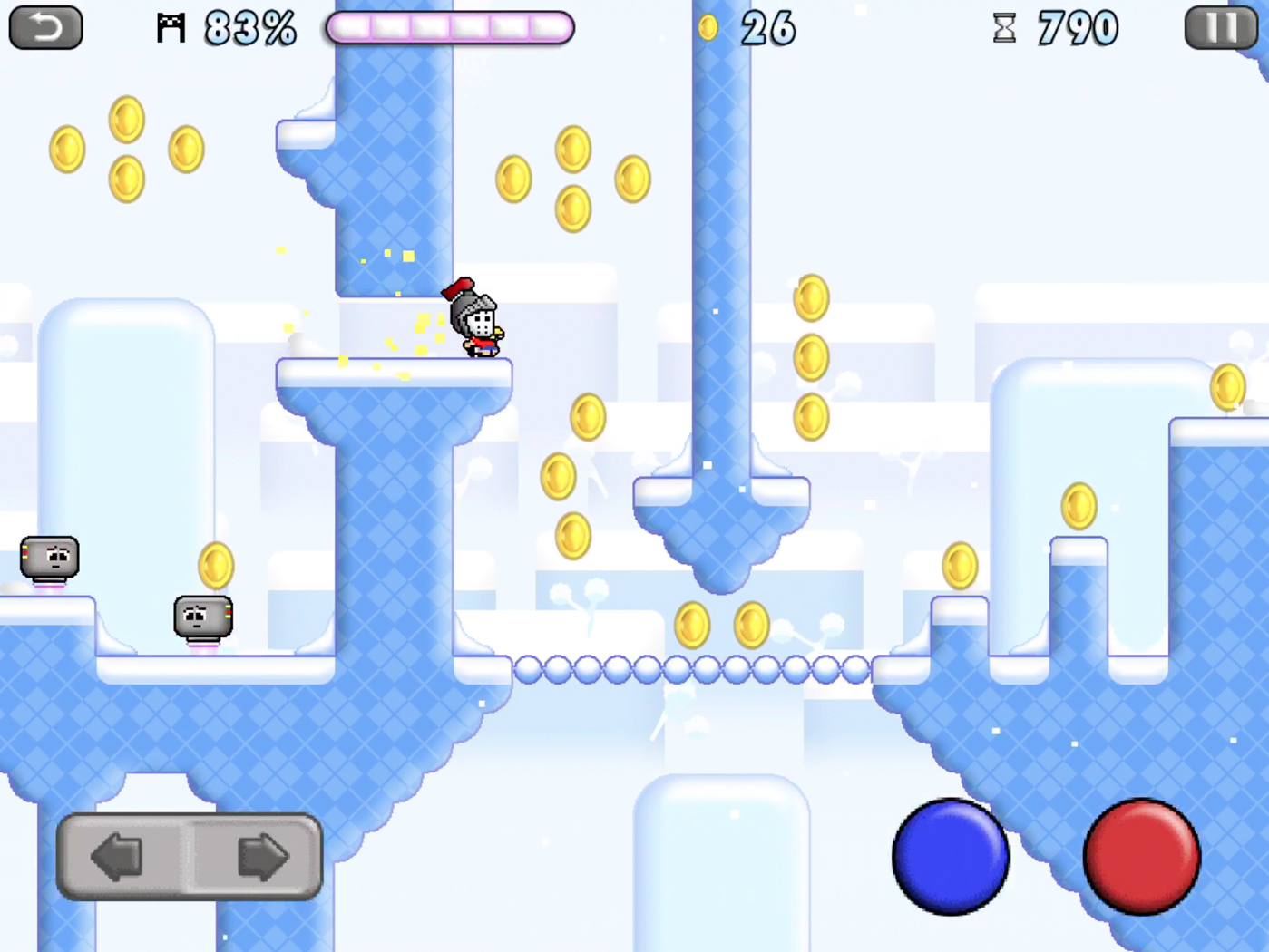 After a handful of updates to add more challenge levels to Mikey Shorts, BeaverTap was ready to get started on a sequel. Given their mutual appreciation of Rocketcat’s Hook Champ series, it was only natural to add a grappling mechanic to the next Mikey game. A few other changes were made to streamline the speedrunning aspect of the game, and a whole new set of levels were built to take advantage of the new mechanics. The Challenge Mode was retired in favor of a new Race Mode, which featured a smaller set of levels that were greatly expanded to offer more paths.

Development on the sequel was a lot easier than the original game as the game didn’t have to be built from scratch, but the swinging mechanic took a lot of time to get just right. Mikey Hooks released in August of 2013, just one year after the first game. Fans of the first game loved the new one, and the reviews were equally sunny. It was clear that there was demand for more Mikey games, and the ending of Mikey Hooks seemed to point at a possible new gameplay element for the next game. As it had with Mikey Shorts, BeaverTap delivered a couple of updates to Mikey Hooks before moving on to a third game. 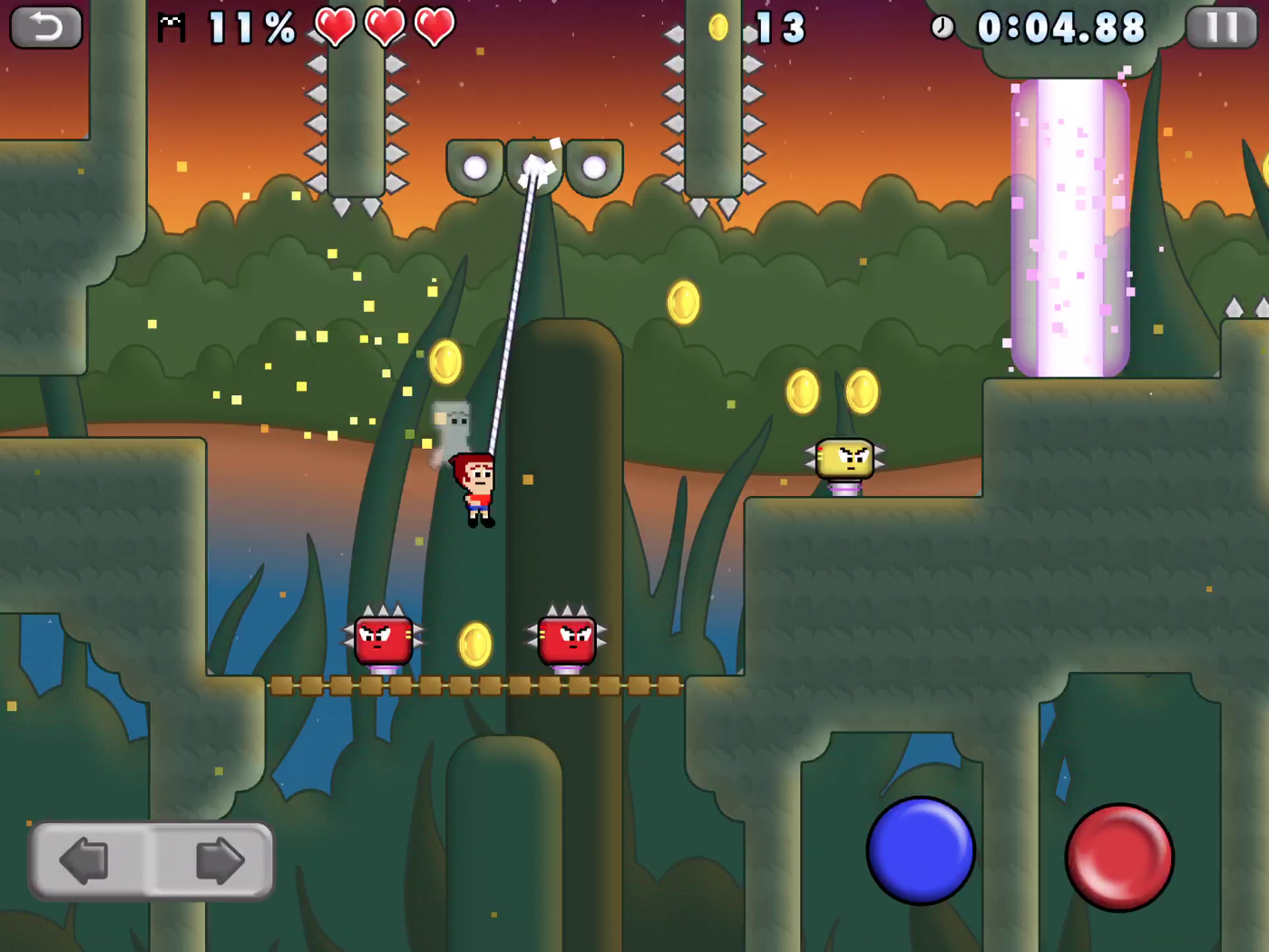 The next game, Mikey Boots, would be built around another new item in Mikey’s arsenal: rocket boots. The grappling hook was retired as there wasn’t a lot of point in it, given the boots would allow Mikey to fly. This new enhanced mobility required a whole new approach to the game design. Mikey could fly, but to compensate for that he is no longer able to stop. Most of the platforming elements were removed in favor of a fluttering mechanic. It’s likely this aspect was partly influenced by the runaway success of 2013’s Flappy Bird. With this new gameplay style, players could go wherever they liked, but the levels were designed to be a lot more restrictive.

Various other parts of the game saw changes as well. Instead of offering two different modes, all of the levels were now presented in the main mode, grouped by difficulty. A second playable character was added, allowing players to choose between Mikey or a new female character. Mikey Boots released in September of 2014, just shy of the August releases of the previous games. While some players lamented the big shift in the core gameplay, the game still reviewed very well and found a happy and dedicated community waiting to speedrun the game’s levels over and over again. 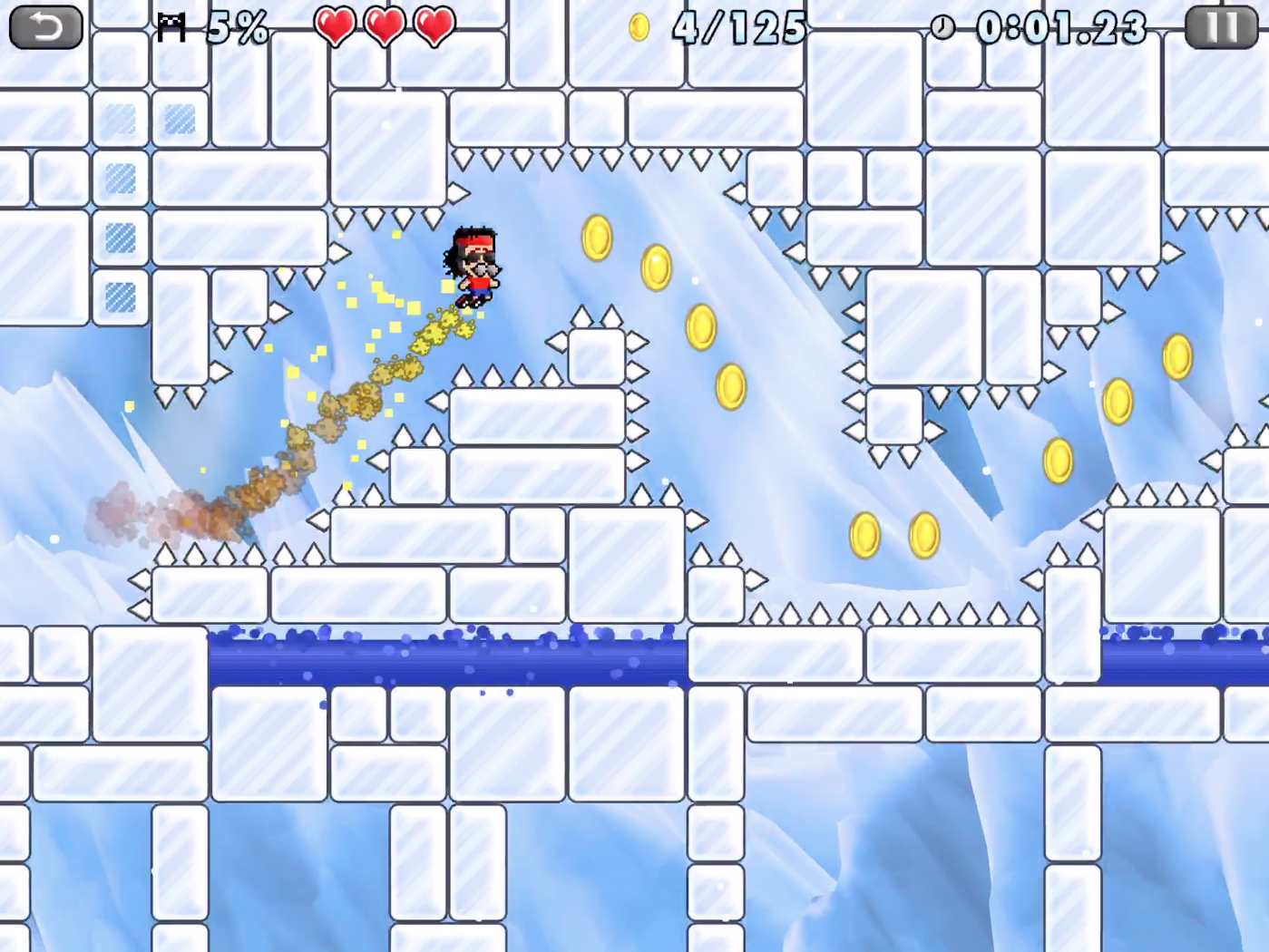 With the release of Mikey Boots, it seemed that Mikey’s days were done for the time being. BeaverTap’s 2015 release was a minimalistic action game called Radical. It was a fun game that reviewed well, but it didn’t attract quite as big of a crowd as Mikey had. By this time, however, the nature of the App Store had changed quite a bit from when Mikey Shorts had released back in 2012. Free-to-play games with ad support were the new hot item, and paid one-and-done games were struggling to catch on. Between the market conditions and how well the series had explored its ideas in the first three games, there didn’t seem to be room for Mikey to return without making some dramatic changes.

In one sense, 2016’s Mikey Jumps seemed to step away from the things most fans associated with Mikey games. It was free-to-play rather than paid. Speedrunning was no longer part of the game. Mikey had a limited number of lives that could only be replenished by waiting a certain amount of time, watching an ad, or refilling the stock using a premium currency. Levels were small and generally devoid of the multiple paths that the previous games offered. Mikey automatically ran forward at all times. Was this really a Mikey game? 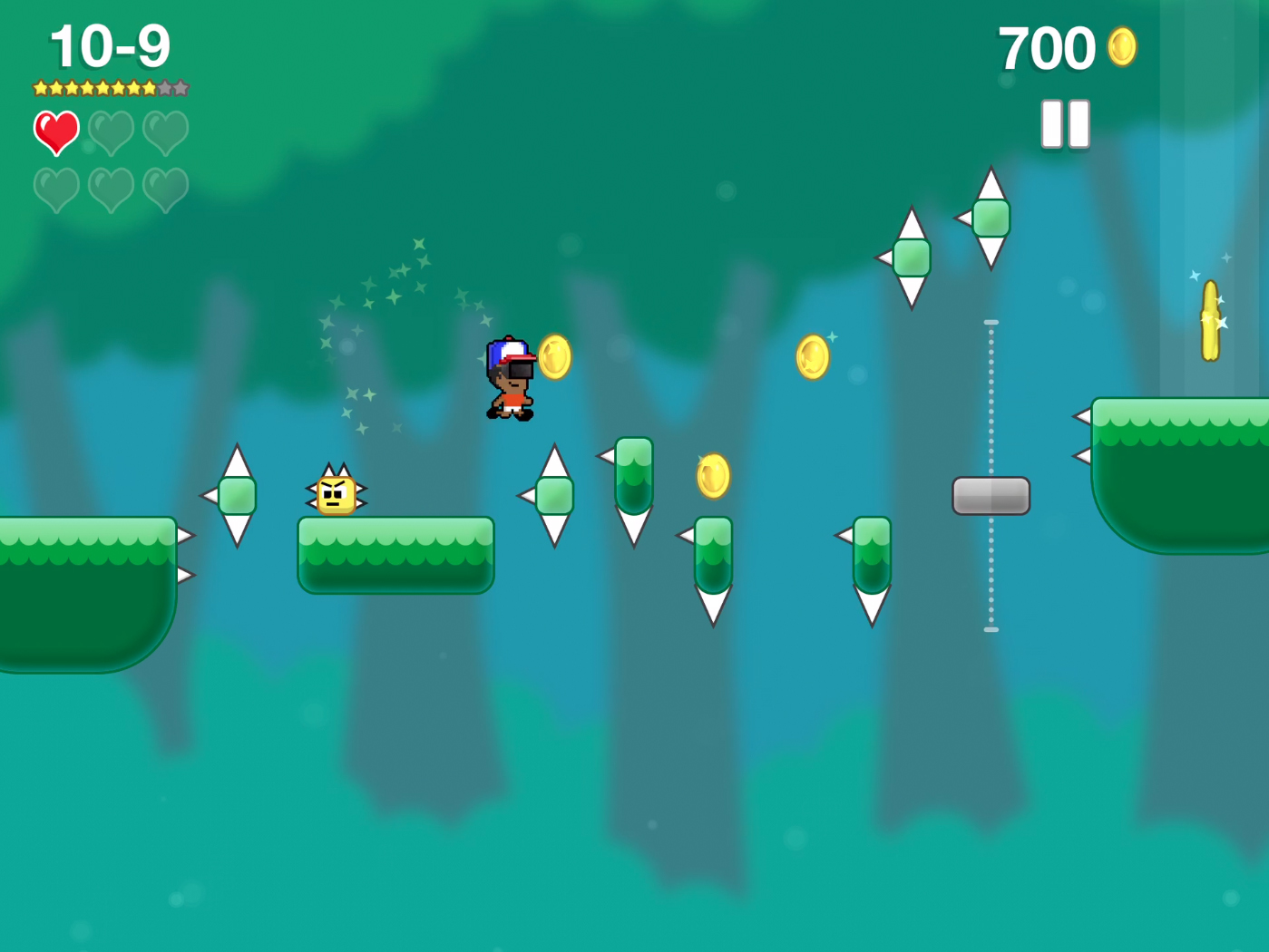 In another sense, Mikey Jumps was the ultimate Mikey game. The grappling hook from Mikey Hooks was back. The rocket boots from Mikey Boots also returned. The focus was back on tight platforming, albeit with a consequence of losing lives rather than time for failing to land your moves correctly. Best of all, the game came with a pile of levels. It started with 200 levels and would eventually offer double that through later updates. Still, there was no question that some of the changes seemed to be motivated by the economics of the market at the time, and some players weren’t happy with that.

Mikey Jumps released in November of 2016 and while it didn’t review quite as well as the previous games, it still earned quite a bit of praise. Even those who didn’t appreciate the major changes tended to agree that it was very good for what it was, but the loss of the speedrunning aspect seemed to hurt its ability to generate a community. Nevertheless, many players found its level designs to be among the very best in the series, and with six playable characters and lots of unlockable disguises, there were more customization options than ever.

After making a few big updates to Mikey Jumps, BeaverTap Games moved on to other projects and it seemed the future of the Mikey games was no longer certain. Luckily, the entire series was fully updated and made part of the GameClub library in 2020, bringing this amazing mobile platforming series to a whole new generation of players.

Mikey Boots could be the hardest in the series — so take these tips with you into your next round!

Trying to beat your best time? Check out these hints to speed up your next run.

Tips and Tricks for Mikey Shorts